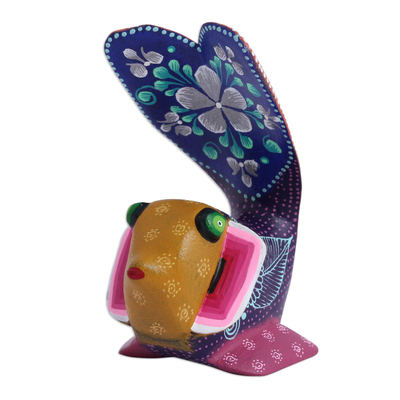 A magnificent whale's tail combines with bulging eyes, extended fins, and a small pursed mouth to distinguish this diminutive alebrije figurine. Designed and hand-carved by the skilled artisans at Mexico's The Zapotec Dream Family Workshop, the sculpted figure depicts a fish with phantasmagorical qualities. Hand painted in purple and pink hues, the sea animal is meticulously decorated, with special attention paid to the floral motif on its tail. This copal wood figurine is a great way to add color and folklore to any corner of your home.

It is said that Oaxaca's alebrije tradition descends directly from Mexico City papier mache artisan Pedro Linares (1906-1992). When he was 30, he became seriously ill and had a dream populated with vividly-colored creatures with body parts belonging to different animals. The beings repeatedly uttered the word alebrije, and when Linares woke up, he recreated these creatures in papier mache. His work eventually influenced wood carvers in the state of Oaxaca who decided to craft alebrijes. Artisans have been making them ever since, imbuing them with a style shaped by Zapotec culture and the rich textile tradition of Oaxaca. 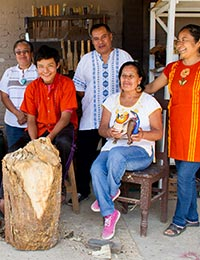 "It's easy to find inspiration. We're surrounded by manifestations of nature, of history and culture. All of this can be seen in our designs."

“We have had a little time to work in partnership with NOVICA, which is a great privilege and has given us a much broader vision than we have imagined.

“As craftsmen, we are dedicated to preserving this beautiful tradition of alebrijes in copal wood, working with materials that the earth offers us for that Mexican essence. We still use the same processes and techniques such as hand carving, sanding, and painting. We still continue with the ancestral technique of detailing our pieces with maguey thorns.

“NOVICA has actively supported us to promote our work at the international level in a modern way; since our work as a family is to preserve what our parents have left us as a legacy. We are very fortunate that our work allows us to be in very close contact with our families.

“Time, experience and perseverance have allowed us to perfect our techniques and the touch that our family gives to this beautiful tradition. This has led us to win several competitions; among them, 1st place at the state level of the Popular Oaxaca Toy 2017 contest in wood for ‘Distinctive Modern Artisan’.

“We have managed to have the foundation that supports our family, as the second generation of art initiators in our community, Our uncles and our parents, through their ingenuity and creativity, managed to consolidate wood carving as a representative craft at the state, national and international levels.

“Now we want to develop our brand in a consolidated way that allows us to share this seal of our family that has given us great happiness. Now we instruct the next generation, that is our children. That is the most important reason to move forward.”

"Our family workshop came to life in a Zapotec town in Oaxaca. When we were still children, we learned how to help our parents with the farming. Our father, Enedino Cruz Hernandez, was one of the early wood carvers who created alebrijes. Everyone in the family is very proud of him and we work to transmit the art to the next generation.

"The most fascinating part of our work is the connection we create with nature and our ancestral Zapotec culture. The colors elicit a sensation of mysticism that impregnates each work of art.

"One of the characteristics of our workshop is that we try to be sustainable in the use of wood. We use yacahuite pinewood or white copal wood, which we acquire from certified distributors. We also use the wood from other endemic types of copal, which are abundant in the region. For some special cases, we use other natural materials like soil, which we use to make dyes.

"When we decided to set up a workshop of our own, it was quite a challenge. We had to reconsider our goals and our discipline. We continue moving forward with the clear objective of sharing our family legacy, the Zapotec tradition of crafting alebrijes. Each one is a quality work of handcrafted art with a vision that is emblematic, innovative and symbolic of Oaxaca.

"We want to have an impact on Zapotec art.

"Our dream today is to create wood carvings that characterize us as a family committed to the reforestation of the copal tree. 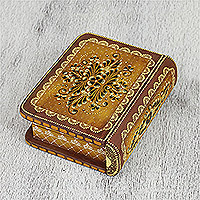 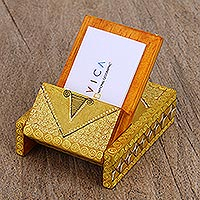 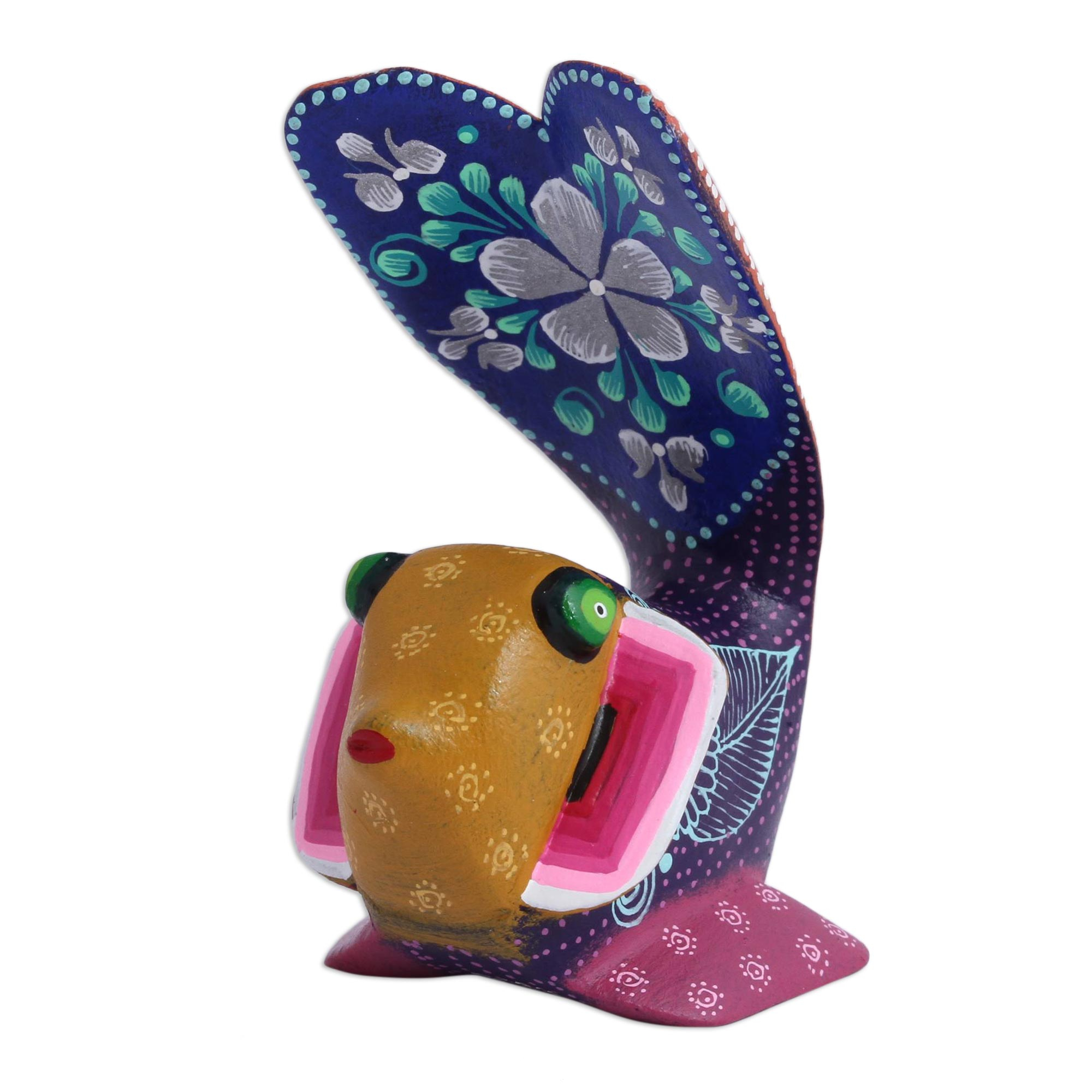