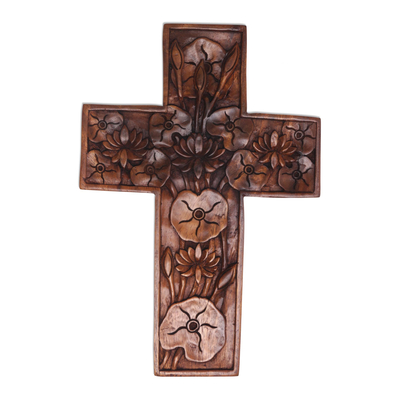 Adorn your wall with this beautiful religious cross from Indonesia. Artist Nyoman Subrata adds to the grace of the cross with beautifully carves lotus blossoms and foliage, a symbol of purity in Indonesia. This piece or art and symbol of devotion would be a great addition to any room. 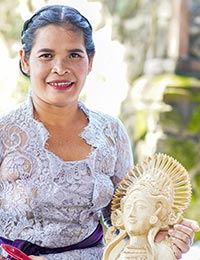 "I will… continue my father, Nyoman Subrata's work to keep his name remembered as a great artisan. I will carry on what my father started."

Master wood-carver Nyoman Subrata was one of Novica's first artisans. Sadly, he passed away in 2020. His daughter, Nyoman Indrawati Subrata, honors her father by continuing to create his designs to perpetuate his artistic tradition.

"I was born in Gianyar, Bali in 1982 with given name Ni Nyoman Indrawati. I was born into a traditional family that lives by way of our cultural inheritance. My father was a master wood sculptor and had been carving from a very young age. I used to help him finishing the sculptures he had done.

"My childhood was awesome. I always went to school and, after that, I helped my father. When we were on holiday from school, I also spent many days helping him. He began teaching me how to work with woods and the necessary tools when I was in elementary school. I learned how he began by choosing the best wood, making the design and also finishing the sculpture.

"After receiving my college degree, I began to work in a gallery and even helped out as a packer. After some time, I decided to help my father since my other siblings had their own jobs and I thought it would be good if I helped my father. Eventually I became his right hand.

"My father worked with NOVICA from their early days. We got so many insights from NOVICA — how to make our sculptures better, to maintain the quality and to make sure our customers were happy with our work. I used to take care of the NOVICA orders until they were finished.

"My brother belonged to a group of master carvers in Bali who worked side-by-side for decades. Now, 28 years later, this woodcarving group still exists and I am its elected leader.

"In the beginning, my older brother, Wayan Sukamara, taught me the various techniques of sanding and finishing. In 1974 I began to sculpt, taking inspiration from some of the finest statues and carvings of our region. The traditional forms and poses were of strong beauty and fine workmanship, which inspired me to learn this style.

"My favorite statue themes are the Singa, Chili, Garuda, Sri Pudhak, Legong, and Barong. Rama and Sita are my favorite subjects for masks; these are traditional characters in religious mythology and offer a variety of ways for an artist to express creativity and style. For the past four or five years my work has been featured in exhibits in Bali.

"The influence of my younger years has continued to guide my work. What I wish now is to continue upholding the values of those who taught and inspired me, while being able to continue taking very good care of my family and my woodcarving group.

"In 1977 I married Nyoman Jati. We now have four girls and one boy, and three of them have finished school. We live in the same village where I was born.

"I have a funny story, one you might not understand if you did not grow up in Bali: It happened once when I brought some of my carvings to Denpasar, our biggest town. I visited the shopping center there, and saw an escalator for the very first time. I really wanted to try it, but, not understanding how it worked, I tripped and fell. Everybody laughed at me. They thought it was very funny, but I was terribly embarrassed!"

"What I wish now is to continue upholding the values of those who taught and inspired me, while being able to continue taking very good care of my family and my woodcarving group." 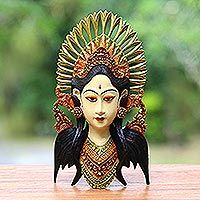 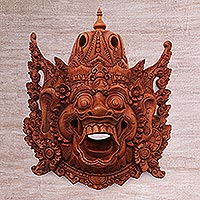 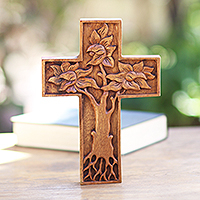 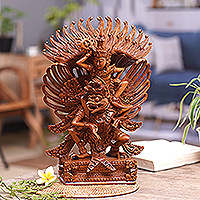 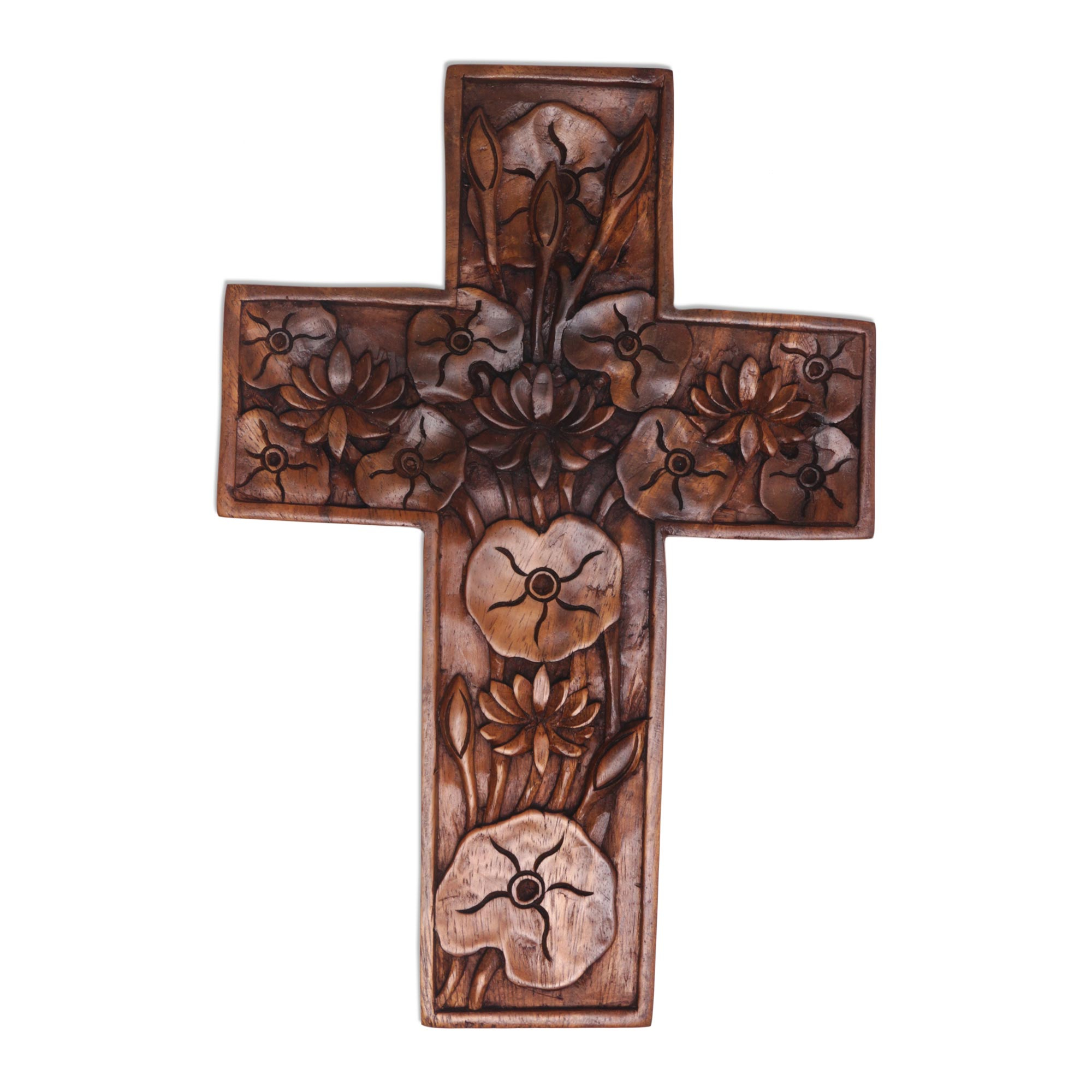