Nyoman Lentong pays tribute to the Chinese white snake legend with this beautifully crafted flute. Bai SuZhen was a snake who became a beautiful woman. Unaware that she was really a snake, a young scholar fell deeply in love with her. But a monk who knew the truth banished Bai SuZhen to the bottom of a deep well and saved the scholar's soul, though it is said his heart was broken.

Flutes of this type are used in the Balinese gamelan percussion orchestra, whose importance goes well beyond the pleasure of music and into the realm of ritual ceremony. Lentong shapes the bamboo by hand, using burnt coconut ash to create the motifs. He signs it as "Pan Nasib," as he is known in his village.

Because each flute is individually handcrafted, size may vary up to +/- 1.5 cms. 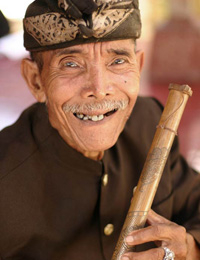 "This era is the greatest time in my whole life; although my wife passed away already, I can live peacefully with my family and my wife is peaceful in heaven. People today are more open-minded when compared with the dark times I have passed.”

"My name is Nyoman Lentong, and I was born during the Dutch colonial era at Sangeh, Bali in 1921. In the old time, Sangeh was quiet; not many people came around that time. In contrast, now Sangeh is more crowded and many people live here. I came from an ordinary family; my parents were farmers and our lives were hard. My parents had 11 children and I am number 8. All of them have passed away except for my little sister and me.

“As I remember, I went to Sekolah Rakyat or primary school in the year 1935. There I fell in love with the art world. I started creating traditional paintings on paper. I drew wayangs or puppets using pencil. I first made a flute for a Gamelan ensemble in 1960. Then, as time went by, I decided to sell them. First I sold them in the traditional market in Sangeh. The traditional market had existed since the Dutch ruled in Bali. Because the result from selling was good, then I became more focused on crafting bamboo flutes with traditional paintings in 1971.

“I was married to a woman in 1951, and in 1952 my first child, Nasib (which means “fate”), was born. Besides making and selling bamboo flutes, my wife was also selling nasi bungkus (a type of Balinese food). Thank God we were able to support our son until he graduated from a college in Denpasar and became a teacher in Klungkung. We actually had two other children, yet both of them passed away when they were still kids because of sickness. At that time there were not many doctors and medicines, just traditional herbals; so they could not survive.

“The hardest time in my life was around 1965, when all the Communist issues began. I was slandered as being one of them. My house was burned down by people who accused me of being part of a Communist party. It was a major problem in Indonesia during that era. After that, nobody wanted to buy my wife’s food and my flutes. I had to make bricks and sell them, work in rice fields, and take other hard jobs to support my family. But, thank God, all of the difficult times have passed and now I can live peacefully. Nowadays people in my village respect me, and no more people are mean to me.

“Other people see me as a hard worker, funny, and honest. Honesty is one thing that I always taught to my son and my grandchildren. I believe everything will work out peacefully if people are honest.

"Selling flutes is great for me, and Novica’s customers help me. Novica demands great products; that is why my flutes can be sold there, because my flutes are one of a kind and all of them are handmade. Making a flute is a long journey. I learned to make flutes by myself just because of my interest in art and music; no one taught me. All the designs and processes were also created by me. The bamboo I use is special; it is difficult to get bamboo that is capable of producing the right tones.

“It is a pity; now my hands and fingers have started shaking and are weak due to my age. I am no longer able to continue my flute production. Unfortunately, no one is willing to continue this kind of craft; even my only son is busy with his own passion. But today, my great grandson is interested and starting to learn about it from me. This era is the greatest time in my whole life; although my wife passed away already, I can live peacefully with my family and my wife is peaceful in heaven. People today are more open-minded when compared with the dark times I passed.”

Nyoman Lentong says that the income from Novica has helped to support his family and also save for his son, grandchildren and great-grandchildren.

“The bamboo flute has special characteristics that have been commonly used by Balinese musicians to express artistic feelings through melodious flute music. Its sound is soft but sharp, that touches our ear and heart. In olden times, most Balinese men played flutes as a way of attracting women. The Balinese named this flute suling, or seruling.

"The natural sounds of wind blowing through leaves and trees on the slopes of mountains inspires me to craft my bamboo flutes. Different sizes of flutes produce different sounds that fit the gamelan ensemble as a part of the harmony.

"The crafting process starts with selecting small bamboo--we call it buluh. I clean and cut the dried bamboo according to the length I want, carve the holes, and adjust the tune harmony. The last process is painting, using black color made of burnt coconut ash. I need about two weeks to complete one flute."

Lentong signs his work as "Pan Nasib, Sangeh," as he is known in his village. Pan means father of and Nasib is the name of his son. Sangeh is the name of the village where he lives.