Baseball is originally known as America’s favorite pastime; however, in recent years’ other countries, like Japan have taken on a love and a passion for the sport… and they’ve begun spreading the news. One Japanese man, Ogawa, is now being called a Japanese baseball missionary by the New York Post. He, along with others, have helped to create leagues in Burkina Faso and Tanzania. 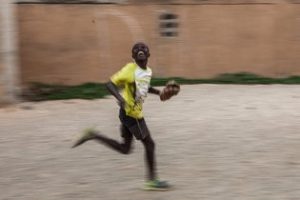 While many African boys don’t know who Babe Ruth is and weren’t affected when Jeter took the field for the final time, they are beginning to love the sport itself for its spirit and rules. In the program that is run by the Japanese missionary, children learn about team work and rules—both of which much be practiced not just on the field but also out in society. There is discipline to the practice as well as tons of fun.

The game has given some young African boys hope. While they are still learning the simple basics of throwing and catching, they are already looking towards the future with one player saying “I want to go abroad…I want the name of Senegal to be celebrated.”

Ogawa and another local volunteer instruct a total of 50 children. Since 1970 upwards of 200 baseball players and 54 softball coaches have been sent abroad and a handful of baseball instructors are working across four African countries.

So do these Africans boy have a chance at their hopeful futures with baseball? Perhaps. The outcome of whether the Olympic Committee will bring back baseball and softball to the Olympic games in 2020 (which are scheduled to be held in Tokyo) could result in a positive boost for baseball in Africa.

Previously, an elite group of players from Africa played baseball in the Olympics; however, without the growth of the sport overall, instead of just through elite programs, the game will not expand. The population of players is small in Africa and the sport needs to be introduced from a grass roots sport to a mainstream sport, to grow big dreams.

Rachel Armah is a talented artisan from Accra in Ghana (West Africa), who helps support her children by creating hand-crafted jewelry. Hear from Rachel…